My apologies for the lack of posts in the last week or so. Unfortunately finishing off the university year had been sucking up all of my time but that is now done and I can put some decent effort back into All Ale The Big V.  Everything will get prettied up a bit in the near future with a lot more links to all things beer and Vic.

I did find the time to pop out to Hawthorn recently to visit Slowbeer. What a fantastic beer shop.  It has only been open for a couple of months but it has already started to gain quite a reputation amongst Melbourne’s, and Australia’s, lovers of decent beers.  With over 600 beers available it’s not hard to understand why. 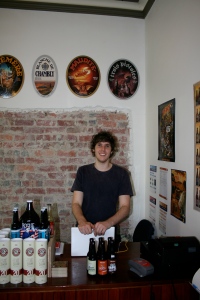 Chris behind the counter at Slowbeer

Chris Menichelli, who is one of the co-owners, took the time out to have a bit of a chat to me.  He told me that the store is something of a spin-off from Cloudwine Cellars which means that there is a solid retailing knowledge behind the venture.  Chris himself has been working in the industry for about 5 years and has a fantastic knowledge of the beer world. 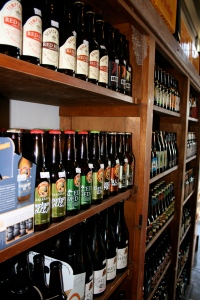 Some of the Vic brews on sale

The Victorian brews have to fight for space on the shelves with beers from around the globe but they are well represented.  You can find the ranges from 3 Ravens, Bridge Rd, Holgate, Red Duck and Otway Estate just to name a few.  Of course we probably should try and broaden our horizon outside of Victoria sometimes and Slowbeer would be a great place to try something totally different.  Chris told me that they are thinking of perhaps getting a kegerator for the shop which would then allow them to fill reusable bottles.  Imagine the fun they could have with getting brewers to do one off specials.

I know it’s a week late but I just wanted to make a quick comment on the Top 20 Beers list that Peter Lalor put together for last week’s The Weekend Australian Magazine.

It seems Lalor’s list was driven more by what is available on the shelves of the magazine’s special edition sponsors, Dan Murphy’s, rather than any serious attempt at a definitive list.  Does anybody really think that between them Little Creatures, James Squire and Redoak produce 9 of the top 20 beers in the nation? And what about Coopers, Grand Ridge and Murray’s making up another 6?  Are the 15 best beers in the country produced by only 6 breweries?  I doubt it.

I find it hard to believe that anybody doing a serious study of Australia’s best beers would be able to ignore the output from breweries like Bootleg, Feral, 3 Ravens, Moo Brew or Red Hill.  If the list is going to be based on availability or on what is stocked at one particular retailer at least put that caveat with the piece.

Now I wonder what this list would have been like if Slowbeer had been the major advertiser?

One response to “Slowbeer and the tale of the disappointing list”